Watch Out For Paralysis Penguins!

Battle Roads have been dominated by Darkrai/Hydreigon and Eelektrik decks so far. There are some decks which can keep up with them - Ho-oh EX, Terrakion/Mewtwo and Garbodor variants for example. Last weekend, another deck gained popularity in the US and Europe: Empoleon/Accelgor. This unusual strategy is not new, but it was not played much up to now. The deck won a lot of Battle Roads especially in Europe. I won two Battle Roads with Empoleon/Accelgor - now I want to explain why this deck is quite strong at the moment. 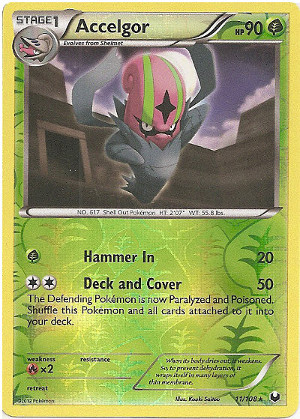 If you don't have Mew EX, you can play +1 Accelgor and +1 Emolga instead. Mew EX is useful against Mewtwo EX and you can use Deck and Cover with it.

Why Is Empoleon / Accelgor Good?

Remember last year's Vileplume/Accelgor decks? They were good, but they were hard to play. Setting up two Stage 2s and then keeping the flow of Mew + DCE going without using any Trainer cards... one can think of easier strategies. But it still worked for some players.

Empoleon / Accelgor needs only one Stage 2 Pokémon and one Stage 1 Pokémon instead of two Stage 2s. After finishing your setup, you only need to draw the cards you need to attack with either Accelgor or Empoleon. In comparison to Vileplume/Accelgor, this is much more manageable because you have a built-in draw engine. This leads me to the second point...

2. It is very consistent. 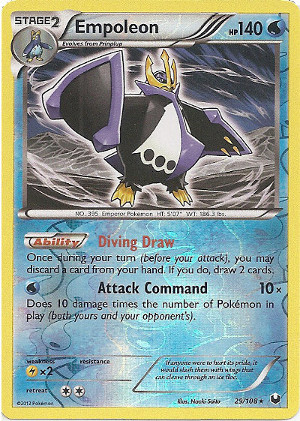 Empoleon isn't the only draw engine of the format, but by far the best one. Diving Draw lets you discard one card from your hand in order to draw two cards. You can get rid of cards that you won't need anymore and get additional options. I think Diving Draw would even be playable if it was a supporter... don't need to say that I don't like Bianca / Cheren.

Cheren is quite good in this deck - at least it isn't bad. Professor Juniper and Bianca are bad if you have a lot of cards in hand. N is good in the early game, but once you have many cards in hand, you don't want to shuffle them back into your deck. It is useful to disrupt your opponent. Once you have a couple Empoleons in play, you usually don't need a supporter every turn.

Emolga is the best starter of the current format and it fits into this deck perfectly. Call for Family and Attack Command have a nice synergy. First you build up a couple Empoleon, then you start streaming attacks. Attacking every single turn shouldn't be a problem then because...

3. It has cheap attackers.

You don't need to attach more than one Energy card to use any of your attacks. Empoleon's Attack Command deals a maximum of 120 damage for one Water Energy. 90 damage are enough to 2HKO every Pokémon-EX. Accelgor attacks with one Double Colorless Energy attached. 50 damage isn't much, but Poison and Paralysis is good. You can put almost every Pokémon into Empoleon's KO range. In addition to that, you can prevent your opponent from attacking or retreating if he does not play Switch the next turn.

4. There are only a few cards that can stop Accelgor.

Since Empoleon/Accelgor does not block Trainer cards like Vileplume did, the opponent is able to play Switch to get out of Paralysis. A deck that includes 4 Switches seems to have a very good matchup against Empoleon/Accelgor. I think that this is an important detail, but not the most important one. Let's think of an Eelektrik deck, obviously a bad matchup for every Empoleon deck. They play 3-4 Switches and Empoleon is weak to Lightning. What can a Empoleon player do?

At first, you should try to knock Eelektrik out. Since you can't hit the bench, it isn't enough to simply catcher up Eelektrik. Your opponent won't waste his or her Switch. But once you cleared the field of Eelektriks, you can catcher your opponent's heavy retreaters. Playing N can prevent your opponent from drawing into Switches.

There are decks that do not even play Switch (or only low counts), such as Darkrai variants. Darkrai/Hydreigon can use Max Potion to buy time, but as long as you can stream Deck and Cover attacks, you should be able to score enough KOs.

Pokémon Catcher is also a good card to stop Accelgor. Your opponent can bring Empoleon active and attack it. There are two problems with that: First, Empoleon is your draw engine and shouldn't be KOed. Second, you can't retreat it because of it's high retreat cost. You should be able to attack with Empoleon, though, but it can still be difficult. My hint: don't waste your Switches!

Espeon DEX is useless because of Pokémon Catcher. Hmm... what about Full Heal? Just kidding.

I'm going to explain the most important matchups out of my Battle Road experiences. I played most games against Darkrai and Garchomp/Altaria. 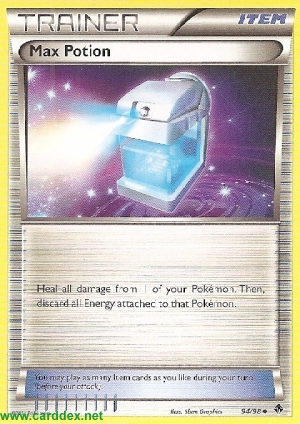 Every deck that doesn't play Switch is a good matchup for Accelgor. Darkrai/Hydreigon can use Max Potion to buy time. Additionally, Hydreigon is able to OHKO Empoleon. Empoleon/Accelgor can not OHKO any Pokémon besides Sableye. This matchup depends on the early game, but I think that Empoleon/Accelgor can bring it under control.

Most Darkrai decks don't play Switch, but if they do, their Accelgor matchup improves a lot. If you don't have a perfect setup, it will be hard to win for Empoleon/Accelgor.

Garchomp can only OHKO Empoleon if there are at least two Altarias in play. The Empoleon player should knock the Altarias out before attacking Garchomp. Once the Garchomp player runs out of Switches, Accelgor can win the match for you. Garchomp and Altaria have the "magical Deck and Cover HP" of 140 / 70.

There are two problems - the high count of Switches and Empoleon's Lightning weakness. Max Potion isn't nice for Empoleon, too. You have to force your opponent to use all Switches in order to build up the Accelgor lock.

Thundurus and Zekrom are the key cards against Empoleon/Accelgor. Rayquaza EX is okay, Mewtwo EX is bad because of Mew EX.

Ho-oh EX are easy prizes for Empoleon because of weakness. You can draw 2-4 prizes from Ho-oh EX knockouts. Destroying it's Energy Acceleration means destroying it's power.

Another good matchup because of weakness. Terrakion is weak to Accelgor and Mewtwo is weak to Mew EX. You can prevent your opponent from attacking by using Deck and Cover and Pokémon Catcher in an intelligent way.

You should be able to set up even without Empoleon's Diving Draw. After that, you can bring Garbodor active and attack it with Accelgor and Empoleon. This matchup should be favourable.

Thank you for reading this article! If you are still looking for your favourite deck to play, I recommend to try Empoleon/Accelgor - it is fun to play and works much better than most players would expect!