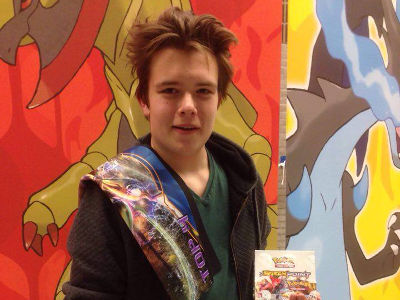 Hey readers, this is my first time writing for Card Leaders, so allow me to introduce myself swiftly. My name is David Roodhof from the Netherlands, I started playing the TCG around the release of XY base set in 2014 in the Senior Division. The 2016-2017 season is my first year in Masters. Last year I ended my season at 1095 CP after winning the Dutch national championship with Seismitoad-EX / Shaymin-EX / Lysandre’s Trump Card, which qualified me for my first World Championship in Boston. Now let's dive in to my fourth place European Challenge Cup (ECC) tournament recap! 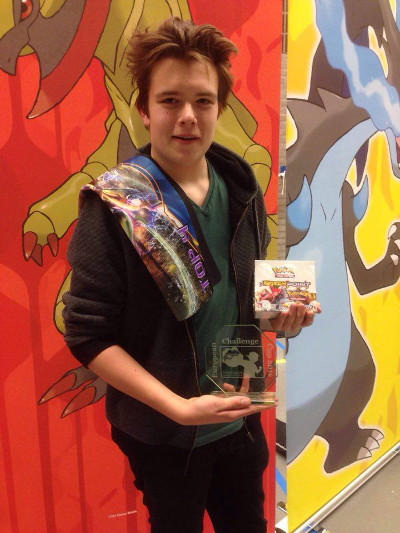 In the weeks before the tournament it was unclear to me what the metagame would look like at the ECC. I knew what performed well at our cities, and what the most popular decks were in the US. I had a list of decks of which I expected the majority of people would play. The top three decks to beat looking at us results were:

And adding to that list looking at the popularity of certain decks in Germany, The UK and the Netherlands were:

My favorite decks that I played during City Championships in Standard were Manectric-EX / Crobat and Lucario-EX FFI54 / Hammers. After testing most of the matchups with these decks I found that the Lucario deck struggled really hard against decks with Crobat in, so that deck wasn't an option anymore.

Then after some more testing I remembered sitting in a train with a group of people, including Mees Brenninkmeijer, who made a chart with the 12 most popular decks and their matchups against each other. The two decks standing at the top of the list were Raichu XY43 / Crobat / Milotic and Seismitoad / Giratina with 50/50 or better matchups across the board. And after a while I decided on ToadTina, as I remembered losing to it multiple times at cities when the deck was piloted by Benjamin Pham and Mees Brenninkmeijer and how consistent it ran. 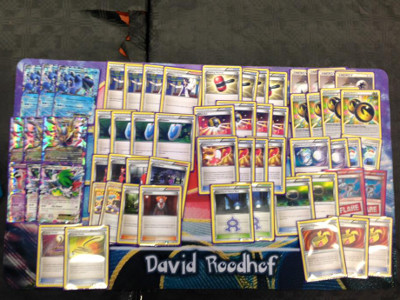 My final list was about as straightforward as can be, but let's go over some mildly odd choices in my list:

My initial list ran one Judge and one Birch, but after testing running two Judges felt like the correct play. This because the list ran super consistent, even when you're only getting to draw four instead of 5/7 (when you flip heads on Birch) and the added benefit is that Judge turn one can be brutal for your opponent, especially when they're running a deck that naturally draws dead sometimes, i.e. things that run Bats and Vespiquen decks. It can cost them a game sometimes before even getting a turn!

During the tournament and online there were many lists that cut mails for things like Skyla, extra disrupting supporters, a 1-1 or sometimes even a 2-2 line of Milotic PRC, while that might come in handy it felt unnecessary to play these cards in my list, as running four mails gives you more outs to hit the turn one Judge or Hex Maniac and the overall added consistency.

This stadium felt like the correct one to run in this deck as it doesn't hinder your strategy, but might be overlooked by your opponent, which can cause them to promote things like Crobat and not being able to free retreat anymore. This ultimately probably happened 4/5 times during the tournament, which put me in a way more advantageous board position most of the time. 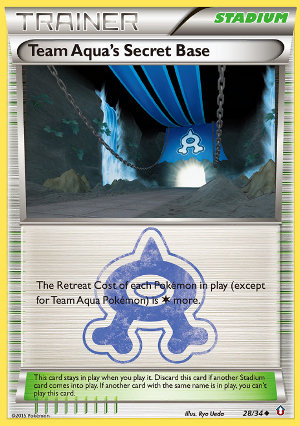 Now that we looked at my list, let's talk about my tournament! I started my day off pretty awful, with a 1-2 record losing the first round to an Yveltal / Seismitoad-EX / Zoroark / Hammers deck. I won the second round versus a Night March list without Enhanced Hammer or Xerosic quite easily once Giratina-EX was powered up. In the third round my opponent was playing ToadTina too, but with Enhanced Hammer and Megaphone, which caught me off guard after promoting Hoopa-EX to soak up some damage. I ultimately lost that round.

At this point my record was 1-2-0, me and my brother were joking that I'd have to win the next six rounds to get in cut, which would be easy, right?

Well I actually won my next six rounds against 2 ToadTina, 2 Manectric-EX / Bats, 1 Raichu / Crobat / Milotic and one Entei / Charizard. Most of these rounds went pretty smoothly, except for the last one. Let me explain what happened in the first game of the ninth round.

I was playing against a man from Germany, who was playing the same deck as me, ToadTina, but one of the key differences in our list was that he played Silent Lab.

We both had to win this match in order to proceed to Day Two.[/b] During the first game he had a commanding lead and a much better board position, at one point I played down Shaymin-EX to Set Up for four, but before drawing the cards I noticed Silent Lab was in play, say I can't draw any cards and ended my turn with an almost empty hand.

During his last turn he was forced to Sky Return to get Shaymin-EX out of the active position and my opponent proceeds to play Shaymin-EX out of his hand for 5, did you notice what went wrong? Indeed, the Silent Lab was still in play, so after he drew 3/4 cards I told him - pointing to the stadium - that he couldn't draw cards.

The judges couldn't decide on what the ruling would be as I was almost certain that he had shuffled his cards around in his hand, we had a time extension of ten minutes at this point. The final ruling gave him one card (which he would have had in his hand before the Shaymin-EX) and a prize penalty, which I took. The one card he got was Judge, which he played. In my following turn I played down an Energy and a Judge of my own. After that my turn was over. He drew his four cards of the Judge and played a Trainers' Mail for Sycamore and shuffled his deck.

During the shuffling I glanced down at his hand only to find out that he had only three cards in his hand, plus the one on the side from the Mail. He totally forgot to draw a card for his turn which can happen after 15 hours of being inside the tournament hall.

Not knowing what to do, we called the judges over, only to get yet another time extension. The ruling went as follows: because my opponent played a card "before" his turn which shuffled his deck illegally and because the draw is mandatory he got yet another prize penalty. So me going from a bad board position and behind in prizes, to a tie in prizes and a decent field set up. My opponent was, very understandably, upset and made quite a few suboptimal plays the following turns, which most likely cost him the first and probably the second game. 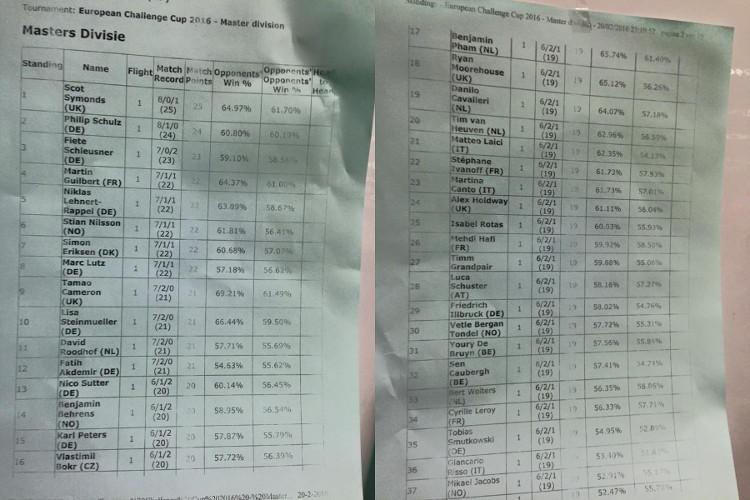 After a very short period of sleep, Day Two started and there was an issue with my deck. After a long day of playing some of my sleeves had bent corners. I received a game loss the first round of Day Two which was very disheartening for me.

Here's a recap of my Day Two Swiss rounds:

I had tested the mirror quite extensively, which might have given me the edge, but the thing that was extraordinarily crazy, my opponent wanted to go second in this matchup. After a turn one Judge he must've felt different about it.

This was one of the weirdest matches I had all weekend. I won my first game due to Sky Return and using it multiple times and in combination with Team Flare Grunt / Hammers I managed to squeeze out the win. I got destroyed in the second game, because one Shaymin-EX was prized.

In this entire series I flipped eleven coins, ten of them were tails. There's nothing you can do about that, but that might have influenced the outcome. Still a very nice man I played against - his list played two (might've even been three) Miltank FLF83. Those were crazy good against me.

At this point I was 9-2-2, at 30 points one person would most likely bubble. Once I saw I got up paired ID'ing was safe. So we did. 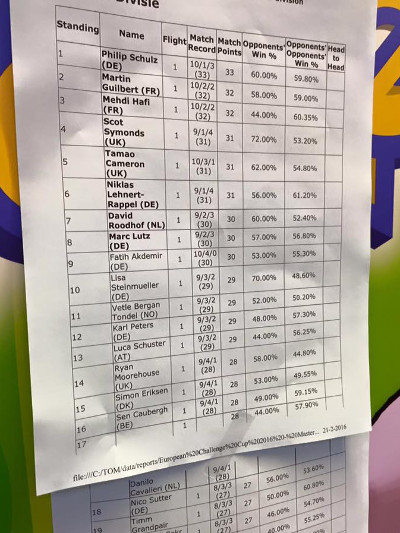 At this point my brother and I were extremely happy with my top 8. I went in at the seventh seat, and had to play against Martin Guilbert from France. He played Manectric-EX / Crobat which was one of the better matchups to hit. I won't go too in depth about this game, as it was streamed. My match can be found here: https://www.youtube.com/watch?v=P-ecjg9j0lI.

But we both made a misplay regarding stadiums, he did in the first game when my stadium was in play and he tried to retreat into his attacker. My misplay was during my first turn of the second game, he went first and played down Parallel City. I benched Hoopa for Toad, Tina and Shaymin. Played down Toad and Tina first, then went to bench Shaymin, which I couldn't do, because of the stadium. Whoops.

Top 4 went by very quickly. I played against Mehdi Hafi from France, who played Night March. He won the coin flip and Judged me turn one into a handful of cards I wasn't able to play. I lost turn 3.

The second game he lost after Hex Maniac turn one and two and him not being able to make any kind of set up.

The third game went kind of back and forth, but in the end the combination of him hitting for gigantic amounts of damage, while discarding my energy with Enhanced Hammer and Xerosic, was too much to handle.

This round was over in 20 minutes including shuffling before and in between games.

To look back at the tournament I'm very glad with the deck and list I chose to play. If there's one thing I would like to have added in my list it was a Startling Megaphone for when my opponent went first and played many tools down. 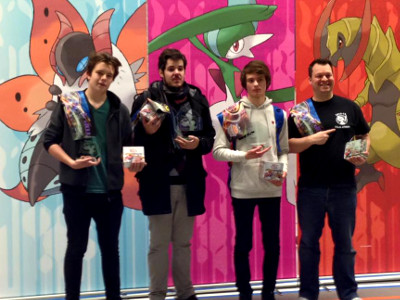 I'd like to congratulate Mehdi for winning the whole thing, and would like to thank the entire staff for making the event run so smooth.

After my top 4 at the ECC I'm currently at 495 CP - see you at Worlds! Special shoutouts to my brother for being awesome and supporting me throughout the weekend and to Bjarne Osinga for playtesting the week before. Also a BIG shoutout to Card Leaders for letting me write for their site!